While they brush or floss their teeth, many people notice streaks of blood in the sink and ask themselves, “Why are my gums bleeding?” The answer is probably gum disease.

Gingivitis is the early stage of gum disease, and bleeding is a sign that the gums have become inflamed because plaque has been allowed to accumulate on the teeth. Plaque, one of the bleeding gums causes, is a sticky film made of bacteria that lives on sugar and bits of food. As it accumulates it turns into a material called tartar or calculus, which can be hard to remove by normal brushing and flossing. The good news is that gingivitis is easily treatable. This article will attempt to explain gum disease, its treatment and prevention.

Why Are My Gums Bleeding? Periodontitis

If gingivitis isn’t treated, it leads to a condition called periodontitis. This part of gum disease has three stages:

• First Stage
In the first stage of periodontitis, plaque hardens into calculus and begins to creep beneath the gum line. The gums respond by pulling away from the tooth.

• Second Stage
This pulling away of the gum from the tooth forms a pocket that becomes a habitat for bacteria, which not only multiply but secrete toxins that start to eat away at the bone and tissue that secure the tooth.

• Third Stage
By this stage, deep pockets have formed. The roots of the tooth are exposed and the bacteria continue to produce poisons that eventually destroy the architecture that supports the tooth. It’s at this point that the person not only asks “Why are my gums bleeding?” but “Why is my tooth loose?” At this stage of periodontist, even a healthy tooth can fall out. 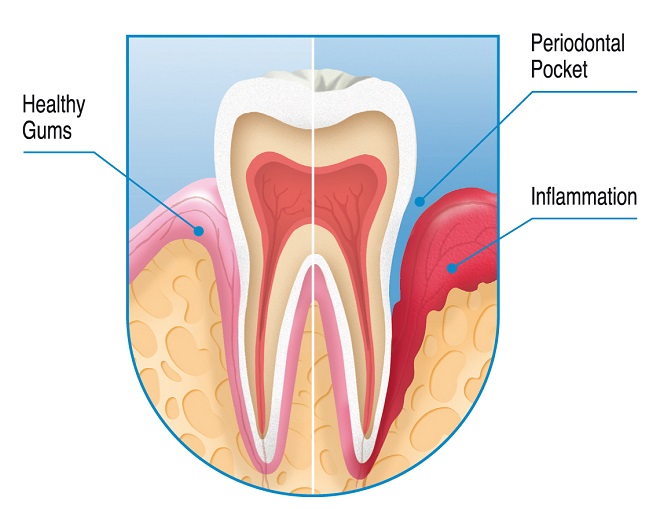 When a person’s periodontal disease is advanced, their regular dentist might send them to a specialist called a periodontist, whose task is to clean out the infection and save the teeth. In the first and second stages of periodontitis, the periodontist performs root scaling and planing. Scaling removes plaque found above and below the patient’s gum line, and planing smooths rough spots from the tooth and encourages the gums to reattach to it. Bacteria tend to stick more to rough areas of the teeth than smooth areas. In some cases, the dentist might scale the bone to discourage the growth of bacteria.

The patient is given a local anesthesia during these procedures. They will probably need to visit the periodontist more than once for planing and scaling. After the sessions, the periodontist gives the patient medications to help them and their gums heal and a schedule of follow-up visits.

The periodontist may also treat the patient with custom-made trays. These trays fit over the patient’s teeth and expose the teeth and gums to antibacterial medicines.

If the above methods don’t work, the patient and periodontist can opt for surgery. Types of surgery to treat advanced periodontal disease include bone and gum grafts and implants.

The periodontist uses gum grafts to stop the patient’s gums from receding further than they have and to protect the tooth.

There are three kinds of gum grafts:

The periodontist gives the patient anesthesia before the procedure. Afterwards, they pack the tooth and the graft to protect them and keep down swelling and pain. The doctor prescribes pain killers and antibiotics.

If a tooth is lost due to gum disease, the periodontist can give the patient a dental implant. This is a crown, made of metal or ceramic, that is placed on a post made of titanium or zirconium that has fused into the jawbone over several months. If the patient has lost bone due to the disease, the periodontist places the post on top of what’s left of the jawbone. Dental implants are used to replace one tooth or multiple teeth.

How to Prevent Gum Disease

It is easy and simple to keep gums healthy. Some things to do and not do are:

Dentists don’t really know why smoking damages the gums and puts them at risk for gingivitis and periodontitis, but it does. Smoking also weakens the patient’s immune system, which makes it harder for them to heal from the disease once it takes hold and even to heal from any treatment. Periodontists insist that their patients stop smoking at least two weeks before any dental surgery.

2. Brush Teeth After Every Meal

Ideally, the person should brush their teeth a half an hour after every meal. They need to wait because some foods soften the enamel, but the effect wears off after about a half an hour. If a patient can’t brush after every single meal, they should brush at least once a day with a soft bristled toothbrush. Electric toothbrushes are even more effective.

The American Dental Association recommends that a person floss at least once a day to remove food particles that a toothbrush can’t find.

The person should keep regular yearly appointments with their general dentist and should see the dentist more often if their gums bleed. The dentist will be able to answer the question, “Why are my gums bleeding?” Though deep cleaning may be a bit uncomfortable, the dentist can clean teeth and gums much more efficiently and safely than even the most meticulous patient.

Antibacterial mouthwashes reduce the levels bacteria that lead to gingivitis and periodontal disease. Fluoride mouthwash strengthens the teeth, but it should only be used by people who are six years old and up.

Eating a sweet dessert once in a while is fine, but no one should eat starchy or sugary foods all the time. Bacteria love starches and sugars, and even if there no bacteria, sugary foods produce their own acids that injure the teeth.

Healthy gums are not only part of a beautiful smile, but they are a sign of overall health. With good dental hygiene one day no one may need to ask their dentist, “Why are my gums bleeding?”.