Receding gums and periodontitis are leading causes of tooth loss in the US. Between 30% and 50% of the population are at risk of developing some form of gum disease. This article will attempt to clarify the causes and effects of receding gums, while also underlining a number of treatments and prevention methods.

Gum disease can be very dangerous. Left untreated, it can lead to complete tooth loss and even worse complications. However, modern treatment and prevention methods can successfully combat receding gums.

In most cases receding gums are a symptom of periodontitis. Periodontitis is a general term for a set of bacterial diseases. They cause gum infection, receding gums and, eventually, tooth loss. Worse, untreated gum disease can expose you to heart illnesses and other dangerous medical conditions.

The mechanism of the disease is simple, yet difficult to counter without seeking professional help from a dentist. In many cases, early symptoms are inconspicuous. The disease is thus often ignored until later stages when treatment becomes more difficult.

The main trigger of periodontitis is poor oral hygiene, which allows bacteria to accumulate at the base of the teeth. Sometimes, bacteria might even start to build underneath your gums. As the bacteria multiplies, plaque, or biofilm, starts to build up at the base of your teeth. The plaque is extremely resilient to brushing. However, you can prevent its growth by maintaining a strict daily oral hygiene.

In case of sub-optimal oral hygiene, plaque continues to grow at the base of your teeth until bacteria begin to infect the surrounding gum tissue. This stage is generally known as gingivitis. Depending on the person’s immune system and overall health, the disease might not progress to periodontitis for a long time.

The immune system attempts to combat the bacteria. However, due to the external source of the infection (the plaque on your teeth, which is outside the circulatory system), the body’s defenses cannot reach the source.

If you do nothing at this stage, and if other medical conditions create a favorable environment, the body will react by increasing inflammation in order to combat the infection. This usually leads to gum bleeding, which creates an even more favorable environment for bacteria.

Due to constant inflammation, the gum line begins to recede, revealing tooth roots and, eventually, bone. This progresses slowly over time but, in the end, it can cause irreparable damage to your soft and bone tissue and can lead to further complications. Treatment at this stage is possible, but ideally, you should prevent periodontitis early on. 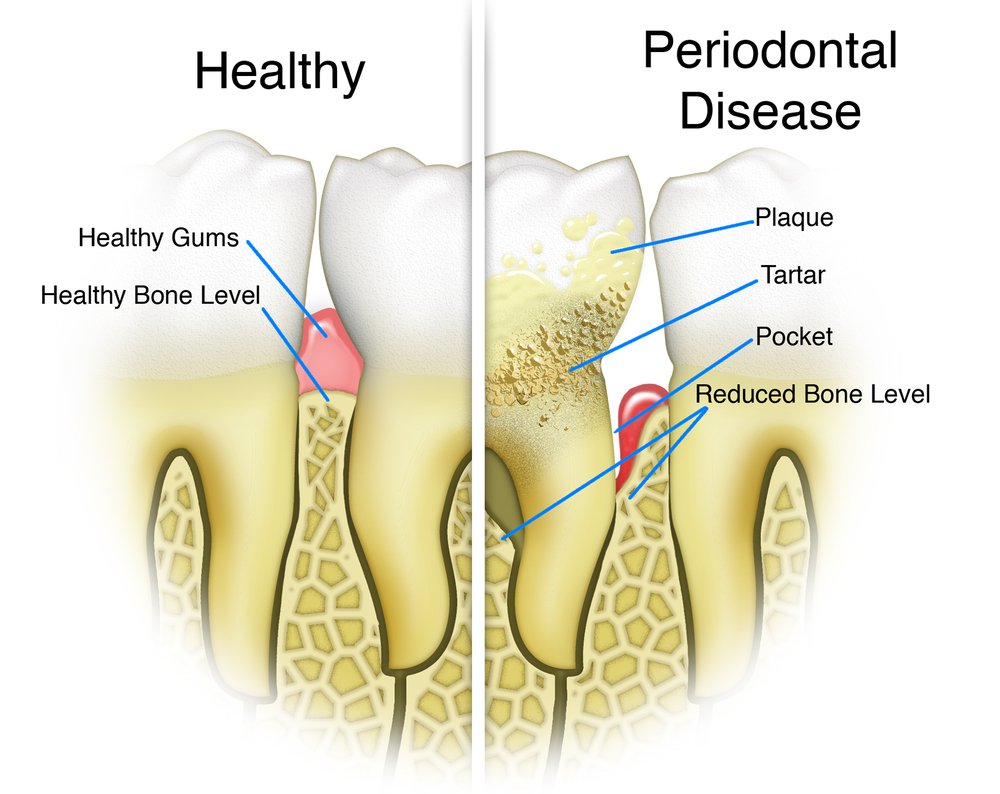 Receding Gums – What are the Symptoms?

The main symptoms of periodontitis are as follows:

Receding gums and periodontal disease are mainly caused by a combination of internal risk factors, like a weak immune system, some diseases or dental plaque formation. In addition, external risk factors also play a very important role. Addressing all of these in time plays a major role in preventing the appearance of receding gums and periodontal disease.

The internal factors can contribute to our chances of developing receding gums and periodontal disease. But the real culprits behind the very high incidence of periodontitis are our bad habits and our unhealthy lifestyle. A person who is at risk of gum disease but does his/her best to maintain a healthy lifestyle is far less likely to have receding gums that a naturally resilient person with destructivee habits. Some of the main external influencing factors for receding gums are:

Periodontitis and receding gums can be treated. It all depends on how much the disease has progressed when treatment begins. The first goal of periodontal treatment is to clean all plaque and bacteria from the teeth, gums and any pockets that might have appeared between the teeth.

Dentists use these procedures in less serious cases and are not particularly invasive. Their key goal is to prevent further development of the disease. Some common approaches are:

Advanced periodontitis usually requires a more drastic approach. Depending on the specifics of your condition, your dentist could recommend:

These procedures are difficult and extremely costly but are highly successful.

In conclusion, receding gums can be treated, but in serious cases of periodontitis, this will also mean a long recovery period and very high costs. The wisest thing one can do about receding gums is prevention. Good oral hygiene, limiting bad habits and scheduling frequent visits to the dentist can all contribute to preventing gum disease and maintaining a healthy life.