Infected gums rank among the most common oral health conditions. In time, they can pose a serious threat to your overall health. The most dangerous aspect of infected gums is how easily one can overlook the condition. This will allow the disease to spread and cause severe health problems.

In this article, we will approach the subject of infected gums from a number of angles. We will discuss what actually causes the condition, what the consequences of poor treatment can be, and how we can prevent and treat it.

By the end of this article, you will have a better overall understanding of the causes and effects of infected gums. You will be much more aware as to why prevention and early treatment are so important.

Why Do We Get Infected Gums?

There are several causes why people get infected gums. Most of them are connected to poor oral hygiene and negligence of daily tooth care. In general, gingivitis is caused by plaque, which is a layer of bacteria which naturally accumulates at the base of the tooth, just next to where the gums begin. If not quickly removed through diligent brushing, plaque will slowly solidify and become resilient to brushing.

The plaque will then serve as a staging area for different types of bacteria. These bacteria will proceed to cause gum infection. Due to being outside the circulatory system, your body’s immune system will not be able to address the bacteria colony at its source, and will struggle to keep your gums healthy.

As plaque matures, more harmful species of bacteria will begin to develop, particularly anaerobic species which can thrive in spaces between the plaque and tooth/gum tissue. The substances they release, including various types of acids, trigger an inflammatory response in your gums. At the same time, they encourage the development of acid-loving bacteria that cause cavities and tooth decay.

If nothing is done over a prolonged period of time (usually measured in years), the infection will eventually cause gum tissue loss, jaw bone loss, and tooth loss. However, this outcome will require years of neglect and contempt for oral hygiene. An early visit to the dentist will solve the problem before it becomes that serious.

Besides plaque, gingivitis can also appear in a number of other situations. Such situations include tooth extraction, root canal procedures, sinus inflammations or wisdom tooth eruption. In these cases, your dentist will prescribe specific treatment to keep inflammation under control until healing gets underway. 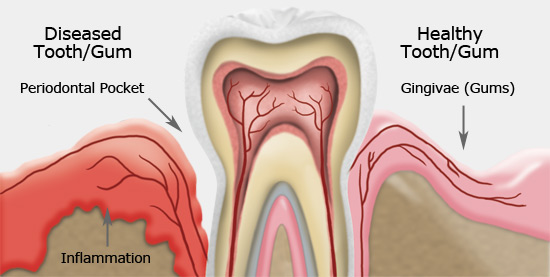 Gum Infection Symptoms – What Happens When We Get Infected Gums?

Infected gums, or gingivitis, is a generic term for various types of infections, ranging from mild to severe, which can occur in your gum tissue. The main causing factor is poor oral hygiene. However, a number of other factors also favor the appearance of gum infections. Due to latest scientific advances in dentistry, the treatment is relatively easy. There are lots of modern remedies and prevention methods. Despite a number of proposed natural treatments, there is no better alternative than getting the advice of a specialist, namely a periodontist (a dentist specializing in gum disease).

Many people are unaware they suffer from gingivitis. Thus, they don’t take any action until the symptoms have considerably aggravated. This happens due to poor public awareness as to what are the actual signs of infected gums. This is also due to rather hard-to-spot symptoms in the early stages of the infection. So, let’s get down to the point and underline the most common symptoms of gingivitis. 1. Painful gums are the most common symptom. Due to inflammation, there will be a mild, dull pain in your gums, particularly when pushing against them or eating.

2. Swollen, red gums. Another tell-tale sign of impending gingivitis, swollen gums indicate the existence of a rather significant infection. They should trigger a prompt visit to your dentist.

3. Bleeding gums, especially during brushing. This is a sign that infection is causing some small but significant damage to your gum tissue, which is vulnerable to brushing. Despite the persistent myth that bleeding during brushing is normal, or even desirable, it is actually an indicator of a potentially more serious form of gingivitis. In addition, bleeding gums mean that there is no longer a natural barrier between oral bacteria and the gum’s circulatory system. It follows that the minor lesions in your gums (also the source of the bleeding) are gaping gateways through which bacteria can further attack surrounding tissue.

4. Persistent bad breath (Halitosis) is caused by a number of chemicals that bacteria release during their normal life cycles. It indicates the existence, or strong potential for, a bacterial infection. Seek expert dentist advice as to how to limit halitosis. Antibacterial mouthwash and diet changes can have a mitigating effect.

5. Discomfort during eating will usually appear as a result of any of the above symptoms. The most common occurrence is a dull and constant pain when chewing, similar to that of tooth eruption. However, pain is not a consistent prerequisite of gingivitis. In some cases, it may be entirely absent.

6. Receding gums is a very serious symptom and might indicate that periodontitis is beginning to take a hold. Periodontitis is a severe form of gingivitis, where the infected gum tissue begins to recede as a result of prolonged infection and inflammation. This will begin to expose the root of your teeth and cause further tooth decay and damage. Eventually, affected teeth may become loose and can even fall out.

Prevention, as for any illness, is paramount for successfully maintaining oral health. In fact, infected gums are so easy to prevent that it only takes a little personal discipline to achieve it. As such, all you need to do is:

The difficulty of treating infection in gums is directly proportional to the amount of time between the appearance of the disease and its detection. In other words, the longer you wait the worse it gets.

The approach to treating infected gums consequently depends on the time of detection. The main focus of early treatments is the removal of plaque. In otherwise healthy individuals, this will result in the gums healing by themselves in a relatively short period of time.

In more severe cases, you might need special medication, and antibiotics. Your doctor might prescribe clindamycin or amoxicillin to help the body tackle more virulent cases of gingivitis. These usually bring a relief in symptoms after a few days. Naturally, antibiotics also require additional probiotic medication to prevent damage to your digestive system.

If infected gums have caused severe periodontal disease, you might need surgery in order to restore full functionality for your teeth and gums.

However drastic the effects of the final stages might be, remember that you can readily treat infected gums if you detect the condition in time. It goes without saying that the worst cases of infected gums usually occur in people with little or no regard for oral hygiene. There is no cure better than a healthy lifestyle. However, always remember that the best-qualified person to address infected gums is your dentist. Consult your dentist regularly in order to preserve your dental health!