Certain prenatal conditions appear early in pregnancies, but might not become apparent to the mother until later in term — or even after birth. One of those is spina bifida, a condition that can develop even before the mother knows that she is pregnant. Below, we explore spina bifida causes, along with its symptoms, the impacts on child and mother, the treatments, and how you can reduce the risk. As you read, you’ll notice that spina bifida can take many forms, ranging from relatively innocuous signs to significant, potentially debilitating conditions.

What Is Spina Bifida?

Spina bifida resides in a class of neural tube defects occurring in the brain, spine, or spinal cord. In this particular disorder, the neural tube of the spine does not completely close. Spina bifida manifests itself, if at all, in the first four to six weeks of the pregnancy.

This birth defect can take one of three different forms, with its own level of severity and consequences:

The occulta version of spina bifida typically creates no disabilities or effects of consequence. A small gap usually not noticed until a child’s later years or even in adulthood, and the lack of any sac or opening for fluid to intrude into nerves or spinal cord, characterize spina bifida occulta.

Meningocele describes the middle ground of spina bifida. Fluid finds its way through an open spot in the baby’s backside, but does not impact the spinal cord. With the spinal cord not being in the sac, nerves do not become damaged and the developmental disabilities rest at a minor level.

The most severe case of spina bifida, myelomeningocele, can lead to loss of feeling in feet and hands, the inability to effectively use the bathroom, and other moderate or severe disabling conditions. These include accumulation of fluid in the brain, malformed shunts (which have symptoms such as seizures, headaches, irritability, confusion, and difficulty eating), lack of ability to walk or run, and breathing difficulties. 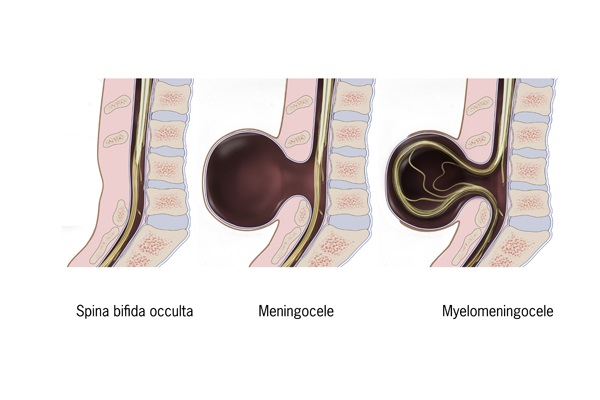 The main types of spina bifida

Although the exact spina bifida causes are not known, those whose pregnancies face spina bifida generally share one or more risk factors:

How Is Spina Bifida Detected?

Prenatal tests for spina bifida take the form of blood samples and ultrasounds. A blood test screens the mother for “alpha-fetoprotein” (AFP) in her bloodstream. High levels of this protein may suggest spina bifida. An initial positive reading for high AFP may lead to additional blood tests to determine the risk level for spina bifida.

Ultrasounds allow obstetricians to view images that suggest the presence of spina bifida. From these screens also comes information on the gestational age of the fetus and potentially more than one baby in the womb. These factors can influence the presence of AFP in the mother.

Beyond pre-birth screening, signs may appear shortly after birth or in infancy. Look for a clump of hair, birthmark, or dimple within the area where the spinal tube did not close. Skin may be absent, exposing the spinal cord tissue. 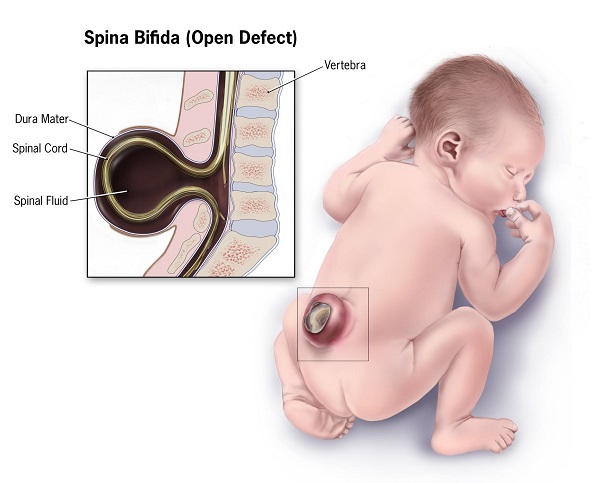 What Is the Treatment for Spina Bifida?

The neurological damage that results from spina bifida is not reversible. However, treatment of spina bifida, especially in more extensive forms, has as its aim to minimize as much as possible the effects and infections.

In the days following birth, surgery seeks to close the open tube that is characteristic of spina bifida. On an experimental basis, certain medical centers may perform a prenatal procedure in which the surgeon sews the opening. To do so, the surgeon must open the abdomen and uterus of the mother. Great care must be taken, as the risk of the experimental surgery may include premature birth and the resulting lack of adequately developed organs, bleeding in the brain, and potentially death. The mother undergoing such a procedure may face infections, gestational diabetes, or bleeding.

As children age and reach adulthood, treatment focuses on rehabilitation, the use of assistive devices such as braces, walkers, and wheelchairs, and shunt surgery where hydrocephaus presents as an effect. Catheterization, medication, or surgery may be employed for those who face complications in bowel management.

A sufficient level of folic acid offers the best defense against the risk of spina bifida, albeit not a full proof fortress. Your intake should reach at least 400 micrograms per day. To get your daily recommended folic acid, consider foods such as:

In this review of spina bifida causes and symptoms, we’ve identified certain risk factors beyond your control and others that you can mitigate. A diet with folic acid and healthy eating, even before you become pregnant, can reduce the chances of spina bifida. Share with us your experiences, what you know about spina bifida causes, and what has helped you prevent or deal with this condition.