Chances are you’ve heard of vaping and found yourself wondering, “Is vaping bad?” The short answer to that question is “Not as bad as cigarettes”. But as to why this is so takes more in-depth explanation. For those unfamiliar with vaping or who are considering giving it a try, it is important to understand what vaping is, what vapes contain, and how it might impact physical health compared to smoking cigarettes. So, let’s see how bad is vaping.

First and foremost, it is important to make the distinction that vaping is not smoking. Vaping is a method of providing legal adults with a way to enjoy small amounts of nicotine, thereby reducing risks of harmful nicotine effects.

Vaping is the inhaling and exhaling of water vapor produced by an electronic device called vaporizer (“vape” for short) or e-cigarette. E-liquid within the vaporizer becomes gaseous, and this is what people inhale.

What is in a vape?

There is surprisingly little or no nicotine in a vape. E-liquid generally contains about 6 mg per ml to 12 mpg per ml of nicotine, and lower dosages tend to sell better. Many who vape have quit or are trying to quit smoking regular cigarettes are are looking for low to no-dosages of nicotine in their e-liquid.

E-liquid comes in different flavors, depending on what the selling company makes. There are often options for flavors like blueberry, raisin, and icy menthol. A lot of makers are trying to stay away from sweet “kiddie” flavors and are truly not trying to reel in susceptible teens to try vaping.

But is vaping bad if there is nicotine in e-liquid? 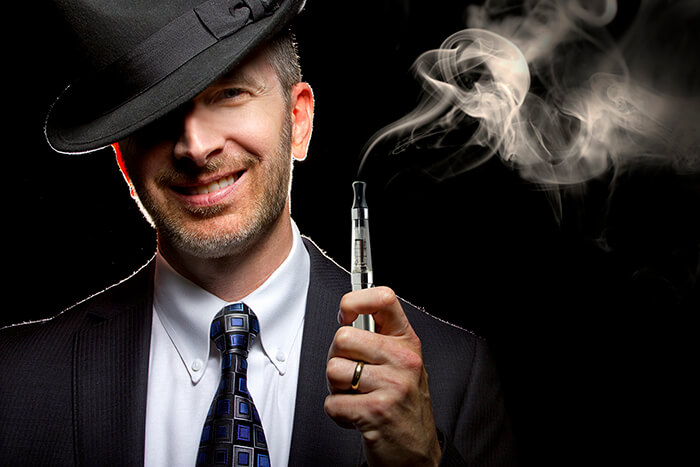 Is vaping without nicotine bad for you?

So, is vaping bad? Certainly, any amount of nicotine isn’t great for you, but vaping is generally less harmful than smoking cigarettes due to the lower dosages of nicotine found in e-liquid. In fact, if you purchase zero-nicotine e-liquid, you do not run any risk of negative side-effects.

Is vaping bad for your lungs?

According to the studies mentioned above, vaping is relatively harmless. In fact, significantly less harmful than smoking cigarettes. While it is not 100% guaranteed to be a safe activity, vaping is being scientifically researched the world over. It certainly isn’t as safe as breathing clean air. The biggest drawback to current research is that vaporizers are a constantly-evolving form of technology. E-liquid differs based on who is manufacturing it, so formulas are not uniform in content make-up. Since the technology is so new, there are no longitudinal studies that show how long-term usage impacts health and well-being.

However, the fact of the matter is that no consumer product is guaranteed to be completely safe. Prescription medications cause thousands of deaths each year in the United States alone. There is some emerging evidence that chemicals in electronic cigarettes might damage the lungs and prevent them from being able to fight harmful invading bacteria. However, there is no research that can strongly conclude that vaping is bad for you, or that vaping is as risky as smoking cigarettes.

Can vaping be a gateway to nicotine?

Many adults worry that vaping might be a gateway to nicotine usage, especially for underage users. However, this is seemingly to the contrary. A 2014 British study by a cancer research center at the University College London found that those who vape are more likely to quit smoking tobacco products than those who quit without any assistance or who use over-the-counter quitting aids.

Teens who use vaporizers most likely are not aware of the research that has recently emerged on the effects of vaping. They are not all critically thinking, “Is vaping bad for me?” In spite of how likely it might seem that vaping could lead to smoking tobacco or doing other drugs, The National Youth Tobacco Survey showed that, between 2014 and 2015, there was a leveling-off of a drop in teen smoking. While 14% of teens surveyed admit to having smoked or vaped in the previous 30 days, this percentage is still significantly smaller than the percentage of teens who were smoking cigarettes in the mid-1990’s. While some teens today do still smoke and some vape, there is simply not sufficient evidence to claim vaping is a gateway to smoking cigarettes.

Is vaping bad for you? Conclusion

Overall, while research on the effects of vaping is still in its infancy (as is the technology it studies), there is no concrete proof that vaping is as bad for you as smoking cigarettes. In fact, it appears that, although vaping is not completely harmless and could contribute to some lung damage over extended use, vaping is the safer of the two options.

Certainly, the best option is to simply not smoke or vape and just breathe clean air, and teens should probably be dissuaded from trying vaping through education on its few known effects. However, for adults who wish to quit smoking without going cold turkey or relying on over-the-counter quitting products, vaping appears to be a viable option that produces some positive results. Is vaping bad for you? Only time will tell, but as it stands right now, it is a resource helpful in the cessation of nicotine smoking.