Fighting nasal congestion becomes a necessity in the cold season, when flu and colds affect a large part of the population.  Difficulty in breathing can also be caused by an allergy, when the nasal membranes swell because of inflamed blood vessels. While there is no universal solution to relieve nasal congestion, some remedies such as aromatherapy, which is also used to relieve headaches during pregnancy, or saline solutions prove effective. Here are some of the best remedies for a stuffy nose.

Nasal decongestants are available in two main forms: nasal spray or pills. They work by reducing swollen blood vessels in the nose and airways. These swollen blood vessels cause the congestion itself. The advantage of this solution is that its effects are immediate. The nasal spray has a local action, not getting in the body, with fewer side effects than oral pills. Most nasal decongestants contain oxymetazoline hydrochloride and neo-synephrine.

On the other hand, these drugs also have adverse effects worth taking into account: they lose effectiveness after prolonged use. People tend to administer it more frequently thinking, which leads to the development of substance dependence.

Doctors advise patients not to use a nasal decongestant for more than 3-4 days to avoid the side effect of addiction. For nasal congestion that does not respond in a few days, oral pills are a better option. Also, nasal decongestants should not be given to children under four years of age. Pregnant women should consult a doctor before using them.

Another side effect of nasal decongestants is a rapid heartbeat. Thus, they are not recommended for people with hypertension, heart disease, arrhythmia or urinary disorders. 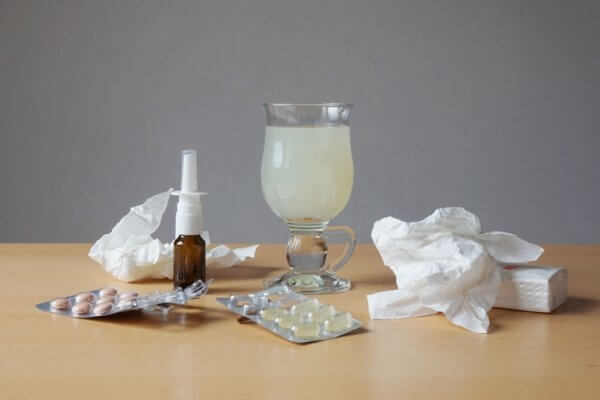 At the first signs of nasal congestion, zinc supplements may help relieve air ways. These supplements attach to viruses receptors, significantly reducing the amount of pathogens circulating in the body.

The main condition for zinc supplements to work is to administer them within 24 hours of symptom onset. Some doctors say that zinc can shorten the duration of nasal congestion, but don’t have actual decongestant properties.

Supplements like Echinacea, vitamin C and probiotics can relieve nasal congestion indirectly by strengthening the immune system. If they are administered in peak cold, their efficacy is unlikely.

A solution made from salt and water can effectively cure nasal congestion. It moisturizes the nasal mucosa and clears the nasal ways. Mix water with one teaspoon of salt and 14 teaspoons of baking soda. Then enter the solution directly into the nostrils with a dropper. It is very important that the water is sterile (filtered through a special device or boiled and cooled). Thus, you will avoid the risk of developing other infections due to pathogens that may exist in its composition.

Among the remedies for a stuffy nose, which is highly effective, is using nasal adhesive strips that widen air passages and facilitate breathing. They are especially useful for fighting congestion due to allergies or during pregnancy.

One of the most popular remedies for a stuffy nose is aromatherapy. Eucalyptus or peppermint essential oils are a natural way to relieve nasal congestion. These fragrances have beneficial properties in relation to the respiratory system.

A well-known folk remedy is chicken soup. This is one of the home remedies for a stuffy nose is more passed down from generation to generation. Studies suggest that chicken soup helps reduce inflammation associated with congestion in the common colds. In addition, the steam inhaled during consumption of a bowl of hot soup helps drain mucus.

A room humidifier solves the problem of dry air in the room, and quickly relieves a stuffy nose. Hydrating the breathing air helps eliminate mucus. If you suffer from asthma, ask your physician’s approval before using such a device. Your doctor might recommend you other remedies for a stuffy nose.

Another home remedy for a stuffy nose is a hot shower. Prolonged exposure to steam soothse irritated tissues and swollen blood vessels in your nose and sinuses. Hot moist air helps liquefy mucus, its easier removal and improvement of nasal membrane to regain optimal breathing capacity.

9. The Smell of Onions

Another great home remedy for a stuffy nose is onion. This succulent plant clears out your nasal passages and brings relief. Onion is an excellent natural disinfectant. Its pungent smell can help relieve nasal congestion and recover faster after a cold.

Rosemary infusions prepared with two teaspoons of this plant placed in 200 ml of boiling water are just as effective in controlling nasal congestion. After 5 minutes of infusion, you can consume the solution 3 times a day or use it as a safe nasal douche.